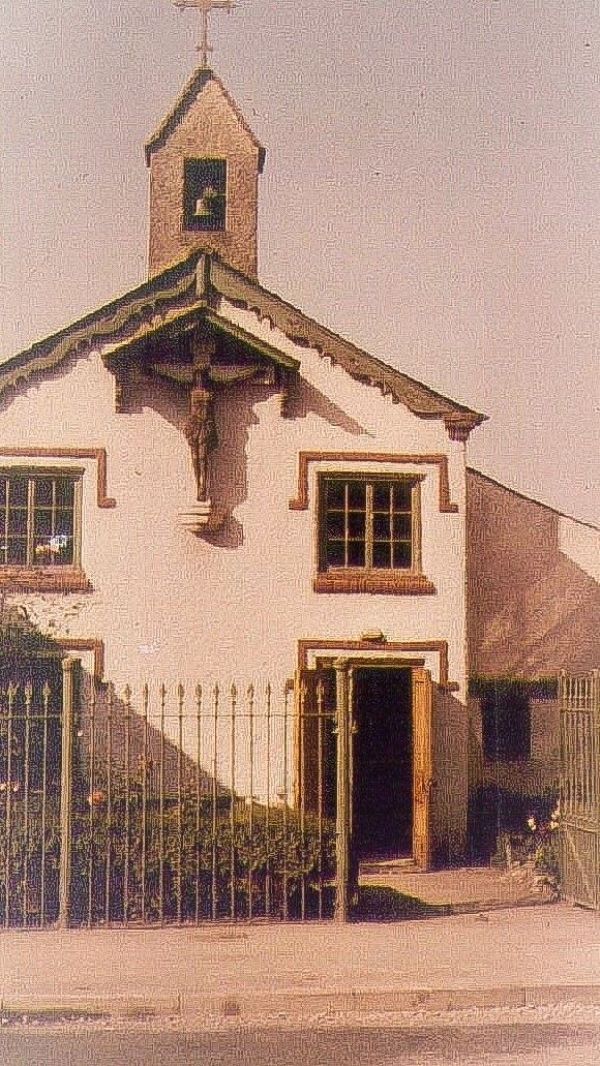 St Thomas of Hereford, The Southend

There were some Catholic missions in the Ledbury area in the late 19th century, but the first temporary chapel, dedicated to St Thomas of Hereford, opened in AD 1903 with Fr Begley as the first Parish Priest.   The church was built in the Southend in AD 1926 and subsequently renamed The Most Holy Trinity.   The church was handy for the prisoner of war camp at Mabel's Furlong and Confessions were heard in Italian at that time.

The large crucifix in Burma Teak which formerly hung on the wall of the former St Thomas's church in the Southend was originally the gift of the Palairet family, probably in the 1930s.   While being  cleaned and restored the original craftsman's name, Charles Victor Gertner of Hereford, was discovered.   Gertner, whose father was born in Rio de Janeiro, was born in 1881 and was active as a wood sculptor from 1900 until 1940.

With the parish growing, major fundraising by the parishioners - including the first Christmas Bazaar in 1953 and garden fetes - raised money for the a new and larger church to be built.

The original site of St Thomas's church was sold and is now occupied by Southend Mews.

The present church building, in New Street, was dedicated in June 1976. 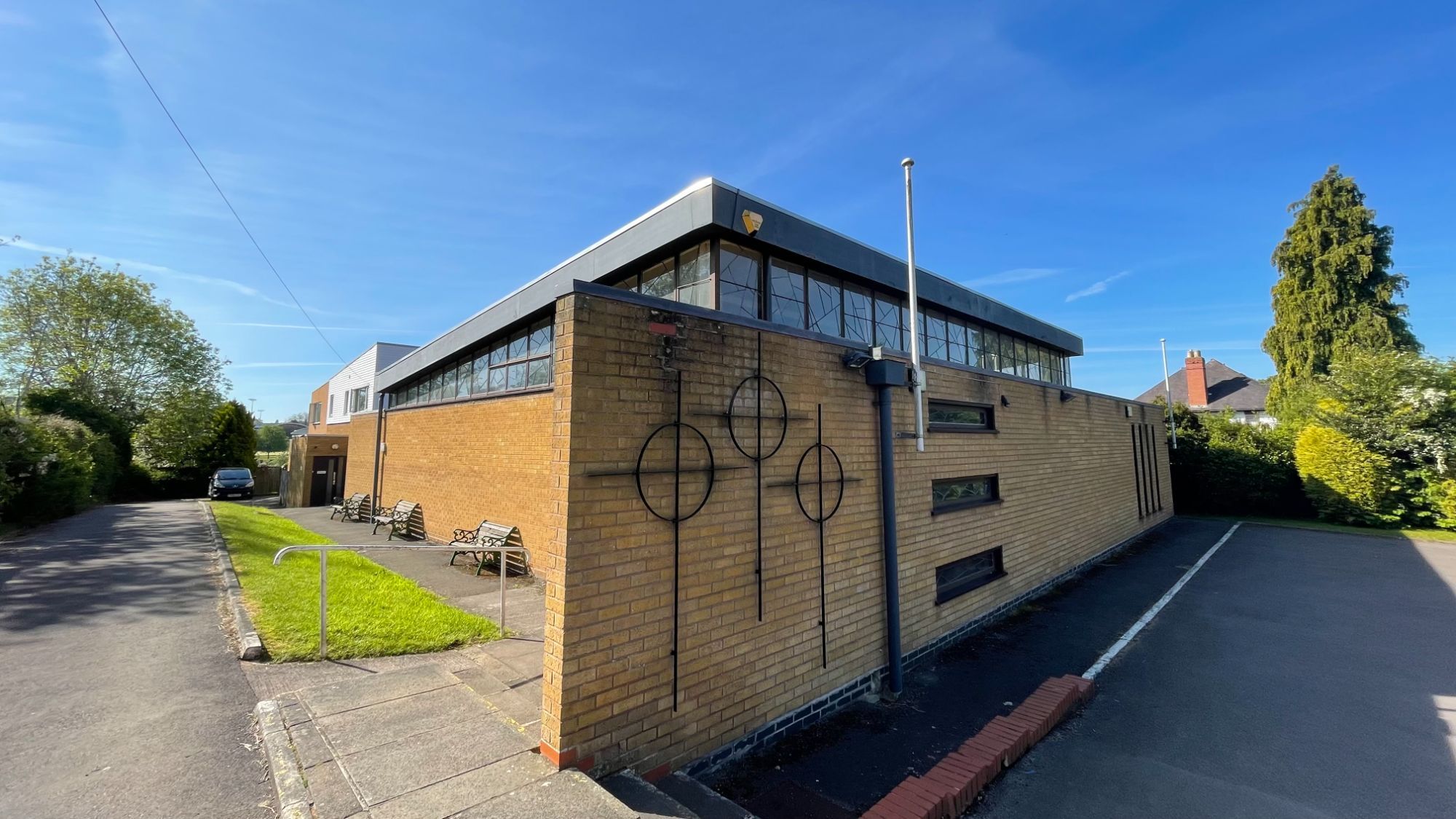 The shallow roof of the church is surmounted by a silver-coloured metal fleche topped by a simple Latin cross.

The Burma Teak crucifix which now stands at the roadside outside the present church building is that which originally hung on the wall of the former St Thomas's church in the Southend.

The abstract stained-glass windows above the altar - representing the Three Persons of the Most Holy Trinity - was installed in 1986 to mark the 10th anniversary of the Church.

A Parish Room (Hall) opened in 1992 and has been well used both by the Parish and by local classes and groups.   A number of large art prints, including of the Annunciation and the Nativity, decorate the walls.   The hall kitchen was fully refitted in May 2022.

The back-lit 1874 French stained-glass window of St Elizabeth of Hungary was the gift of John and Diane Dubois in 1996.   Its renovation was made possible through the generosity of Margaret Adams and it was finally installed and blessed in November 2003.

The Presbytery behind the church was divided into a flat and Parish Centre in 2008.

In Autumn 2011 the Church was re-roofed, a skylight created above the Blessed Sacrament Chapel, and new lighting installed.   Internal redecoration also included plastering behind the tabernacle and behind the Sacred Heart statue.

Most recently during Holy Week of 2021 a new hanging crucifix, carved in Italy, was installed above the sanctuary.

Other works of art distributed around the church comprise:

The most recent addition is an image of the Divine Mercy - once again the gift of a parishioner - hung in the Shrine Chapel at the back of the church, where one can also find a wide selection of Catholic Truth Society (CTS) booklets for sale.

The parish lies in the eastern portion of Herefordshire, bounded in the east by the Malvern Hills.   A map of the parish is displayed next to the sacristy showing that in addition to the the market town of Ledbury the parish also comprises the villages of Mathon, Coddington, Bosbury, Colwall, Wellington Heath, Castle Frome, and Much Marcle. 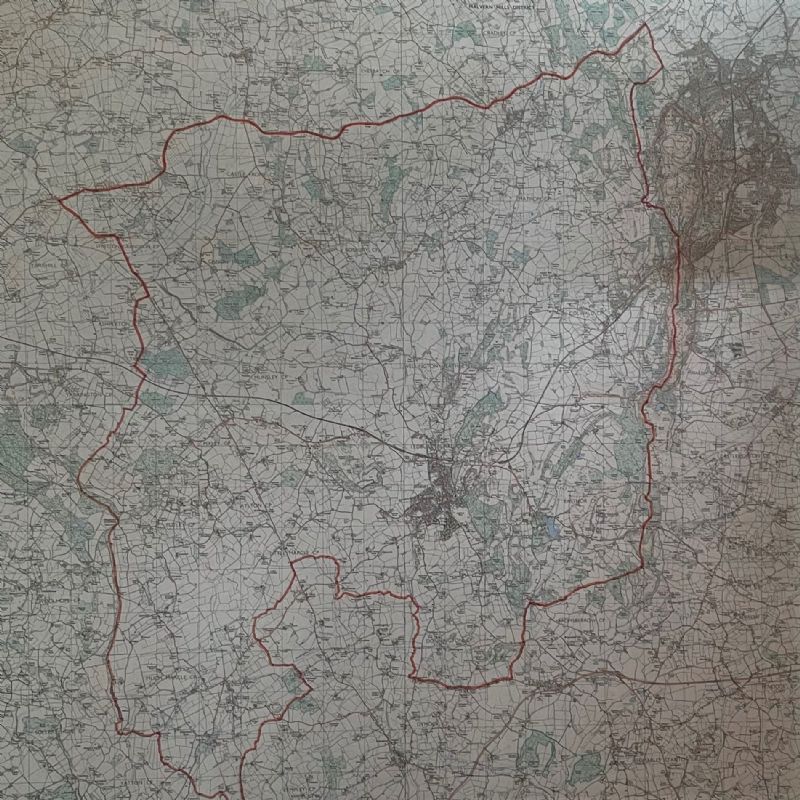